Rocco DeRosa has been part of Shanti Kai™ since it’s inception. Anna Snow joined a few years later, and Jayme, sensing a musical connection, brought them together. Their records drop Saturday night at ONCE (lounge) in Somerville, MA. We are super proud of their work and we’re excited to see Anna’s blog tell their story (below) of how working with Shanti Kai™ Essences through their creative processes brought them to this point in their musical careers. If you are in the Boston area you can check them out by purchasing a ticket . For more event details, visit the Facebook event page.

Have you ever experienced writers block or come up against seemingly immovable obstacles in your work or projects?  Rocco and I have been no stranger to creative blocks from the making of this album to the the CD release show this weekend, and one of the things that has gotten us over these hurdles is using  Shanti Kai™ Essences.  I sat down recently with Rocco to ask him about his experience producing this album, and how Essences help him in his creative life.

Anna: What Shanti Kai™ Essences were you using during this process and how did they help?

Rocco: I’m always using something. In this case, I do remember using Removing Obstacles™ and Mercurease™. I had just finished installing some new gear and it was giving me a hard time. We sprayed some Removing Obstacles™ around it and in a few minutes it was up and working again!  Also in those moments I can have a tendency to feel rushed, or like I’m wasting time trying to figure things out. Using those two Essences and Earth Chakra™ help me to stay grounded while I have people counting on me to figure out the problems.

Anna:  Tell us about winning the Lizard Lounge open mic challenge this week! Were there any Essences that you used before hand that you think may have helped?

Rocco: Winning at Lizard Lounge was a great experience. In all honesty, there are so many people that could have won… But, any time you’re playing music with something on the line, however small, you learn something about yourself, your song and your ability to communicate as a musician. I’ve been really working with the Throat Chakra™ and Guardian Angel™. I’m really spending a lot of energy getting to a point where there isn’t anything from the outside that gets in and derails my process and my ability to communicate effectively. I think these have been instrumental to helping me in all facets of my life. Not just my music.

As Rocco mentioned, one of his biggest roles as a producer is to help people through their emotional process as they are birthing their creative project.  Something that I was not wholly prepared for going into this, was the ways that I would be pushed to grow and evolve emotionally with my music.  Both working with someone who uses Essences, and using Essences on myself throughout this process was so key to this album becoming what it is.

For instance, while recording one of my songs, my voice began to feel very stuck and I just couldn’t seem to get the vocals to sound the way that I wanted.  Having been through this process before, Rocco knew that there must be some energetic block relating to my relationship with the song that was keeping me from being able to record a good take.  I had a session with Jayme to work out what some of these emotional blocks were and then used Essences like Removing Obstacles™ and MercurEase™ to clear some of the energy that needed to go, and transform the song into one that came from a place of healed empowerment.

Now it’s crunch time, as we promote the show, rehearse and get everything ready on top of having other full time jobs!  I’ve been using my Shungite Plus™ and Shungite Master Blend sprays to combat fatigue and keep myself healthy and clear amidst the stress and pressure.  We are both so excited for this show and hope that some of you can make it! 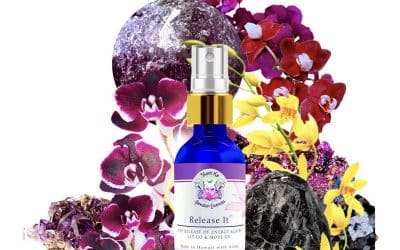 How to use Release It™ Essence Blend

Shanti Kai™ Release It™ Essence can be used to help you move through many aspects of life, including: Breaking bad habits Releasing emotional baggage Body aches & pains* (Addressing the energetic component of pain or physical symptoms) Manifesting Goals Space...